Thank you guys so much for your great comments to my previous post. I thought I’d respond to your comments with this post 🙂

I just had a great individual critique with my professor today, and we basically discussed body image and self esteem. She had actually seen this aspect in my work, even before I did..LOL She gave me a lot of ideas to ponder. The feminist aspect of what I’m doing for one. I mean, women have been fighting the same battles with body image, media, self esteem, power associated with the body, being judged based on looks (beauty contests make me sick), etc for a long time now. She has made me think about the idea of our RL bodies being a facade for what is underneath, what is inside. This vessel that we live in, is just that, a vessel, just like an avatar. Gracie is still me no matter what.

My professor pointed out that I am a very smart, organized, witty, sweet, generous, caring, considerate, energetic, passionate… (ok added a couple things there) woman, and that shows through in Second Life too.  The problems I am having are believing these… but I am working on that 🙂 She did make me think about the idea of empowerment. Rather than juxtapose an image of Gracie with Kris looking contemplative, depressed the world at my feet, or staring down at my feet (seen in the previous post) why not show us both empowered, strong, confident.

That is one thing that Second Life has helped me with. I often say, that in a way Gracie has saved my life. I believe that… and she continues to do so on a daily basis. 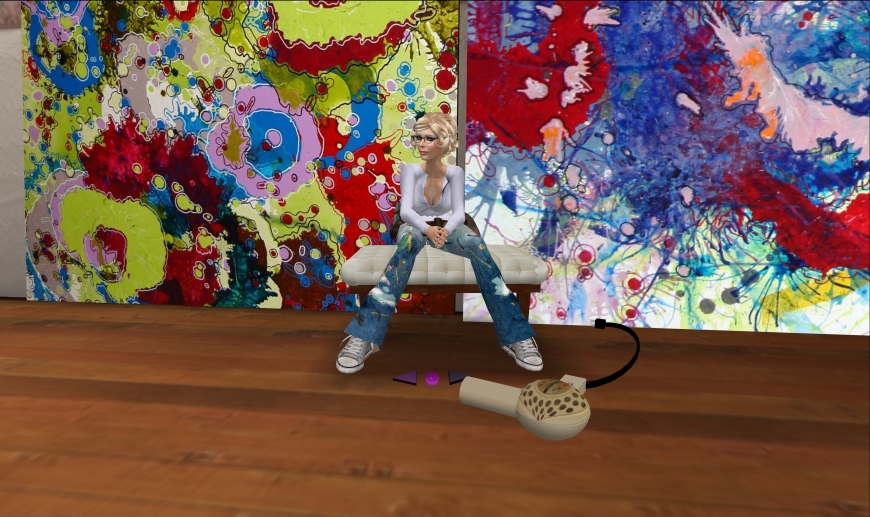 So I have been thinking a lot about body image lately. I saw this amazing mixed reality performance at CSU Long Beach on Sunday night. The artists, are also in Second Life, and have performed mixed reality shows before. This particular one called “Technesexual”  by Elle Mehrmand and Micha Cardenas- Is a live mixed media reality performance, in which the artists kissed in physical and virtual space. Biometric sensors monitored their heart rates, creating audio which was sent into Second Life, linking their physical bodies to their virtual avatars. (Taken from their description). The artists, were fearless.

I was in awe. I couldn’t take my eyes off them. Every now and then I’d look at the screen and see the pulsing from their beating hearts through the green radar above their heads, but all I could think, is how much I envied them for being so fearless. I wondered if I could do this. If I could be so brave to stand in front of a crowd of at least 30 people dancing, kissing, crying, laughing, talking.. etc, in virtually nothing. I have had so much fear in my life lately, I was jealous.

It really got me thinking about body image and self esteem. Personally, I have struggled with both for a very long time. Having an avatar in Second Life who has the “right” Proportions (ideally according to the media, and what I feel I should look like) I thought would help me in the real world. It has I have said, that Gracie Kendal, is an idealized version of myself. A friend said, “no that isn’t right, you would be putting your real self down then. You are just as beautiful in real life as Gracie is in Second Life.” I have a hard time seeing that. I don’t know if its because of the media’s construction of beauty that has been pushed on me for so long or criticism from people close to me. All I can remember since I was young is being concerned with body image. I see people around me today, men especially who gawk and drool over the “model” type women who come across their path. And I know, I KNOW that I would never want a guy who was that shallow anyway, but instances like that can be very depressing. When for so long one is disregarded, because they aren’t beautiful visually… I don’t know.

Anyway, as my art gets more personal, and I start to focus on identity, especially mine, you will see a lot more musings of my life as a human and an avatar…and the connection between the two. My mixed reality.

"The Virtual Possibility of Life in the Mind of Somone Living"

...making the business of marketing and licensing for creators understandable, achievable and affordable.

Visual Artist Management, Coaching, Support and PR. Our mission is to Cultivate Community and Empower Artists to Build a Sustainable Art Practice

A Blog by Karen Schifman

Flash Storms of Art for the Visually Addicted

The latest in all design-related disciplines from all over the world.